When I think about what causes conflict to occur, I am reminded of the duality that is inherent in our world. Think back to high school when you learned about Newton’s third law of motion: For every action, there is an equal and opposite reaction.

For example, duality may be illustrated by day and night, male and female, black and white, positive and negative, sun and moon, summer and winter. In our reality, duality is everywhere.

When we align ourselves too strongly with one of the subsets of duality (a liberal and a conservative, for example) we are setting ourselves up for inevitable conflict. A key to conflict resolution may be to become educated about both sides and willing to see things from the other’s perspective. 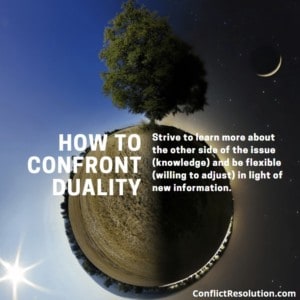 To illustrate: there are, at long last, some wonderful books on the market that provide ground-breaking insight into the differences between the way that men and women are wired (think Men are from Mars, Women are from Venus). They illustrate and prove that men and women, with few exceptions, view the world differently because the totality of their physiology is systemically different. This, in turn, creates differing experiential “information intake” between the sexes and that in itself is processed by them differently.

“Duality is the real root of our suffering and of all our conflicts.” -Namkhai Norbu

The microcosm of the macrocosm here is that on some very basic levels, men and women see, feel, hear, and experience some things very differently. Unless one is armed with this information and has taken some time to internalize it, it’s easy to see why women don’t think men are sensitive enough and why men think women are too emotional. Both paradigms are likely platforms for conflict-filled situations… but they don’t have to be.

If one understands and appreciates some of the inherent differences between the sexes then perhaps it becomes possible to forestall or minimize the difficult personal exchange. The same goes for conflict regarding politics or religion.

What’s most important to remember is that there are many ways to view an argument or a situation and just because one side is partially right doesn’t mean the other is totally wrong. (Also, don’t get into an argument over something that is inconsequential.) Strive to learn more about the other side of the issue (knowledge) and be flexible (willing to adjust) in light of new information.