The Cause of Sibling Conflict

Michael Grose, the author of seven books for parents and a popular presenter who speaks to audiences in Australia, says that he has finally figured out the cause of sibling fighting: having multiple children.

“It is born from rivalry or competitiveness between siblings and shows itself through mindless arguments, noisy squabbles, physical means, verbal put-downs and even long silences,” Grose says, and it should be noted that sibling infighting is present in all families at one point or another. 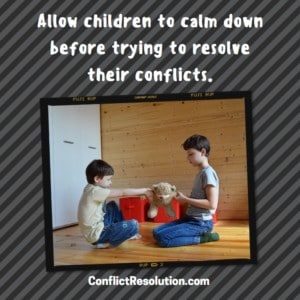 We know that siblings are going to have conflicts at some point or another, and it can be difficult for parents to handle or deal with. Do you step in and try to help help them? Do you ignore it? Should you make them go outside if they’re going to be rowdy?

There are some cases where you should let kids “argue it out” so long as the argument doesn’t become physical or just descend into a screaming match. However, there are times that you can and should step in to help guide your children through the conflict in order to reach a resolution. Here are some steps you can take to help your children:

Yes, I know it’s easier to just put the kids in timeout or ground them, but this isn’t going to teach them how to resolve conflict in the long run. You’re not doing your children any favors by punishing both children or just one of them, especially if you don’t get to the root of the issue.

As a final note, Grose writes, “Oh, and don’t forget to model good conflict resolution yourself. Your kids are watching and learning from you!”