Every workplace inevitably is going to have some conflict: between workers, between the boss and an employee, between the corporate company and the individual franchise, etc. Thankfully, most conflict isn’t overly serious but you should know that it can become a much bigger problem if you ignore a small problem for long enough.

Even trivial problems or petty squabbles in the workplace can grow given the right conditions so it’s important to nip these issues in the bud.

The good news about workplace conflict is that there are signs you can spot before it blows up into a much bigger issue than it otherwise has to be. Here are some problems you should keep an eye on if they’re coming up in your workplace.

Negative or Insidious Gossip: Workplace gossip is inevitable and usually it’s more or less harmless. That being said, there are times when gossip can lead to a much bigger problem coming to the surface. For example, if there is a rumor going around that Employee A is having an extra-marital affair with the secretary — regardless if it’s true or not — that can create a whole host of other issues. 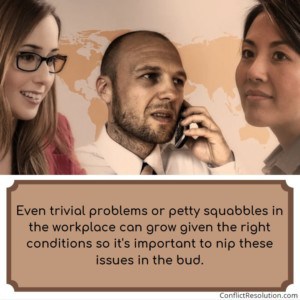 One Conflict Leads to Others: Sometimes a conflict is a symptom of the problem and not the problem itself. If you’re trying to address one issue and other ones are brought up along with it, you’ve got to get to the root of the problem in order to resolve the conflict.

Cliques: It’s normal to like some peoples’ company better than others. That’s just a fact of life. However, when some employees form a sort of exclusive clique that they won’t allow other people into, that can lead to a lot of trouble. People will feel excluded or unappreciated which can lead to a number of other issues.

Too Many Petty Issues: If there is one trivial problem, that’s not a problem. If there are 15 of them, now you have a problem. Start looking into who or what is causing the petty issues.

The Same Problem Keeps Coming Up: If you thought you took care of a problem (ie. someone’s lunch keeps getting stolen out of the break room) but then it keeps happening, it’s important to address it again. Letting the same problem occur over and over again will only serve to make your employees lose faith in your leadership.