All relationships — marriage, friendships, partners, familial — end up running into conflict at some point or another. In marriages or domestic partnerships especially, there are a number of ways that people try to resolve their conflicts:

Do all of these methods work? Do some work better than others? Why do you engage in one method over another? Is one way of arguing better than another?

Some people feel that the only way they can solve their problems and feel better is to scream and shout at their partner. While this may work for some people and so long boundaries are set and enforced, it’s typically not the best course of action if you want the relationship to remain stable.

It should be noted however that if a conflict ever becomes physical (punching, kicking, hitting, biting, throwing things, etc.) that both parties are in danger both to themselves and to their partner. Physical violence should be considered a deal breaker in most relationships as it often leads to escalating abuse — both physical and emotional — and can have lasting negative effects.

Sometimes, one or both partner in a relationship will simply ignore issues. In the short-term, this can work for a little while. After all, forgetting to do the dishes or take out the trash now and then isn’t a big deal, right? 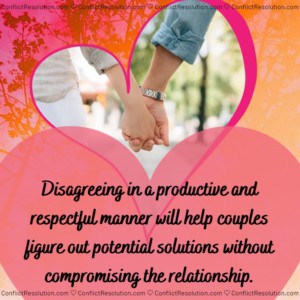 But then a ton of other things start to pile up: late bills, a broken water heater, the smoke detectors beeping from lack of battery, some broken light bulbs that haven’t been replaced, phone calls that have to be returned, the car’s expired inspection… And then when you see that the trash hasn’t been taken out on top of all of that, you explode in frustration and anger — not at the trash, but at everything combined. The trash is only the straw that broke the camel’s back.

For this reason, it’s important to address issues as they arise rather than bottling up emotions and hoping everything works itself out. Your partner isn’t a mind-reader and they might not know that what they’re doing (or not doing) is causing you real anxiety and stress.

Counseling is always an interesting topic as some couples use it for anything and everything while others only see it as a last resort. Obviously, one of the biggest issues with counseling is the time and the cost. Many couples do not have the sort of expendable income to spend on a marriage counselor and sometimes even those who can afford it don’t see it as helpful, claiming that the therapist doesn’t completely understand the dynamics of the relationship.

That being said, for those who are open to counseling and can afford it, it can be an excellent way to work though problems with an objective third-party. Just remember that therapy can take weeks, if not months to actually have a positive effect on your relationship.

Couples are going to argue at some point or another. However, if you make sure that you’re arguing in a productive manner rather than resorting to a shouting match or flat-out ignoring the problem, you’re on your way to figuring out a solution that will not only solve the issue but strengthen the relationship.