One of the cardinal rules of negotiation is to avoid “time pressure” at all costs. Put another way, never to allow someone else (or yourself, for that matter) to pit you against the clock artificially for any aspect of the negotiation.

When we’re under psychological pressure like that of a time constraint, you may make a bad decision, fail to uncover important facts or at least to forego a better, wiser decision is you had enough time to think it over. Of course, there are times in life when you must act expediently and without sufficient “time” within which to analyze a situation. But hopefully those occasions will be few and far between.

Take Your Time When You’re Spending Your Money 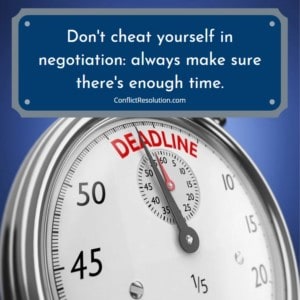 Here’s an example: I set out to remodel our master bathroom. Specifically, I wanted to pull out the original Roman tub and convert the space into a large, walk-in shower with frameless glass doors. I also wanted new beveled mirrors and a few other things. Not a huge project, but if you’ve ever dealt with contractors for a project in your home, you know that every job is “huge.”

So, I gave myself a time frame of six months within which to interview, investigate, and hire a contractor for the job. As it turned out, I only needed four months, but I interviewed nine different companies before I selected the right one.

Yes, price was an issue, but so was integrity, competent communication, reputation, and something real but not necessarily palpable: I had to like him/her as a person. This is because that person would be in my house day after day for several weeks.

I met with nine separate company representatives — some of them more than once. But because I was not under a time limit or emergency situation, I had the ability to take my time in making the right decision. My instincts proved correct. Had I been dealing with a bathroom emergency — water leaks, broken piping, etc. — it probably would have ended differently. But I had the luxury of time.

It’s About Time in Negotiations

During the course of a negotiation, experienced negotiators will often seek to put in place arbitrary time frames that suit them and not you. Comply with them at your own peril.

Instead, ask why they need a specific time frame or why there is such a cut-off date. Ask questions about the necessity for such a time limit. Negotiate for a better option for yourself. There is enough to be concerned about in any negotiation and worrying about the other person’s time frame should not be one of them.

Perhaps you’ve heard of the old adage: “Haste makes waste.” There was a reason for that adage. When we hurry ourselves or allow ourselves to be hurried, we are not spending the amount or quality of time we need in focusing upon all of the important elements of the negotiation. We are more focused on complying with the time limit.

What should you do when you enter into a negotiation with someone who indicates that her time is limited but if you both “hurry up” you might be able to conclude the negotiation? Tell her that you’re willing to re-schedule the meeting at a more appropriate time. Let her know that this negotiation is important enough to warrant that both sides have sufficient time to explore all of the issues and aspects of the negotiation. Don’t cheat yourself in negotiation: always make sure there’s enough time.