The Importance of Facts

I love facts! As a lawyer, mediator and an arbitrator, I so very much love facts! I love and respect facts because they’re elements of the whole cloth of truth.

One needs to be able to identify and rely on relevant facts when resolving conflict because feelings change but facts don’t.

Know that feelings are important in some contexts, but they are not relevant to this particular post. Here, I’m advancing the beauty and wisdom of facts. There is a marked difference between feelings and facts, and this is important because:

The Facts, Ma’am, Just the Facts…

You may think you know the difference between facts and feelings, but do you really? For a real life example, try engaging in a political discussion with someone on any subject relating to politics (gun control, abortion, immigration, etc.). Make sure that you are prepared by having some relevant facts at your disposal.

Now, watch how quickly the dialogue disintegrates into a discussion of feelings:

Today, facts and feelings have been so intertwined that many people can’t tell the difference between them anymore. All of the above statements are either opinions or feelings and none are facts.

Many people don’t like facts that run contrary to their feelings — and I’m not saying that feelings don’t matter at all. I’m just trying to point out that while feelings have their place, they don’t have a place where the facts and the truth are the golden standard.

When you ignore the facts or relegate them to less importance than feelings, you are pulling the rug out from underneath yourself. In a conflict setting, clear, competent dialogue is all-important. If you’re focusing on feelings rather than the facts, your chances of a resolution that will stand the test of time are greatly diminished. In part this is because feelings are transitory — they change — while facts do not. 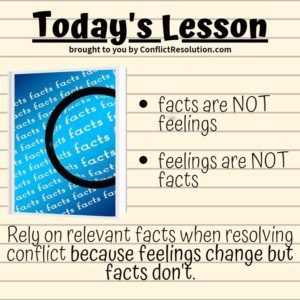 If the fact is that I was born on April 1, that will always be a fact. Fifty years from now it will still be a fact. Nothing will change it. Even if I lie about it, it will not change the fact itself. Facts are immutable. That’s the beauty of them!

In my career, I have the opportunity to listen to hundreds of people from all socio-economic, racial, ethnic, cultural, religious and gender categories tell me their “truth.” They either were giving sworn testimony (under penalty of perjury) in a trial, arbitration or deposition, or they were telling their story in a mediation.

In all cases, I have listened very carefully to what they have said. In many of the instances, the underlying facts of the situation did not support their testimony. What I mean is that the facts were contrary to what they had said. In some cases, the facts had been changed or altered to “support” their version of the events. And in some cases, the facts lined up perfectly in connection with their position or directly supported their testimony.

Once again, a clear grasp of the relevant facts is undeniably helpful in making evaluations or assessments of credibility, circumstantial evidence, or even interpretation of direct evidence. It is critical in engaging in the dialogue that is necessary to resolving conflict.

There’s an old saying in the law biz: “If you have the facts, argue the facts. If you don’t have the facts, baffle ’em with bull.” While I won’t comment on the ethics of this adage here, I will say this: whoever invented it knew the importance of facts.