As I’ve said in many other blog posts, conflict is inevitable regardless of age, gender, religion, ethnicity, socioeconomic status, or any other category. However, just because conflicts are inevitable doesn’t mean they have to end in contentious rivalries or shouting matches. Conflict resolution is possible in a mature and calm environment — one that avoids lasting resentment or anger.

Just like conflicts are inevitable, there are some human characteristics that seem to hold true across all categories. The following points should be considered when trying to amicably resolve conflicts:

Those who are adept at conflict resolution aim to find common ground while also helping the other person so see a different point of view.

1. Be proactive. Being proactive means that you’re taking personal responsibility for your actions, decisions, and words. If you’re thinking ahead to where the conflict might be heading, you can consider what solutions might be amenable to both parties before the newest issues come up.

“Skate to where the puck is going, not where it has been.” -Wayne Gretzky

2. Control your emotions. Overreacting or blowing problems out of proportion (especially trivial things) can turn a conflict into a full blown shouting match with hurt feelings on both sides. Remaining calm — or as calm as you can be, even if the other person is getting heated — will help to keep the focus on the argument rather than feelings. 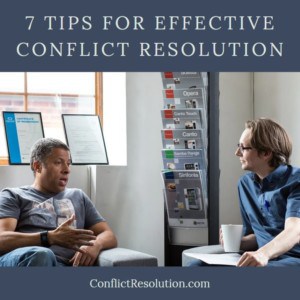 3. Point out mistakes without telling people they’re wrong. Remember, people like people who agree with them and if you disagree, you’re going to be disliked. Instead of saying, “You’re wrong because…” instead try something similar to, “I can see why you have that opinion. Have you thought about [insert contrary point here]?” Perhaps they have and will give you their thoughts on that and perhaps they haven’t, in which case a new route of discussion is opened up.

6. Before pointing out someone else’s wrong, admit one of your own. Coming out and attacking someone will only server to put them in defensive mode. Instead, try to acknowledge one of your own faults before pointing out anyone else’s. “I admit I used to believe everything I read on Facebook, but I’ve learned to do more research now. That’s why I don’t think this article you found on Facebook is a reputable source.”

7. Even if you can’t come to an agreement, seek to mend the relationship. Ultimately, even if you can’t seem to find a resolution to the argument, you can always agree to disagree. Just because you disagree with someone doesn’t mean you can’t be friends anymore. After all, I doubt you’re in complete agreement with any of the other people in your life.