No Relationship is Perfect

Regardless of how good a marriage or relationship is, there is always going to be at least some conflict. No relationship is perfect and there will inevitably be conflict over a variety of things from whether or not to buy a home, how to discipline the children, what to spend that tax refund on, and many more common situations that come up over the course of a marriage. 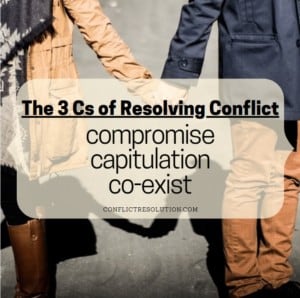 Relationship coach and expert Jeff Herring says that there are six things that cause the most conflict in marriages and partnerships: money, children, communication, sex, religion, and in-laws. Surely you or some of your friends have had these types of conflict before in their relationships with varying outcomes, sometimes good and sometimes bad. If the conflict is bad enough, it can even ruin an otherwise good relationship.

So, if you want to have a healthy relationship, you and your spouse have to be able to resolve conflicts in a manner that still preserves the relationship. Herring suggests three ways to handle conflict in marriage: compromise, co-exist, and capitulation (known as “The 3 Cs”).

When you can, resolving a conflict with a compromise is one of the best ways to preserve a relationship. However, you should note that a compromise doesn’t mean you’re going to get your way. In order for a compromise to be a compromise, both sides have to make some concessions. This can be difficult, especially in situations where you feel that you’re completely in the right.

Remember, the main goal of a compromise is to preserve the relationship so even in cases where you are “totally right,” you’ll still have to cede some things to achieve a compromise.

Sometimes, it’s easier just to capitulate or surrender to your partner over an issue instead of getting into a conflict over it. Obviously capitulation shouldn’t be used with serious issues but for minor inconveniences and other trivial issues, it might be better to just give in.

Capitulation isn’t necessarily a “loss” for you. Instead, it’s putting your relationship health above whatever petty squabble you’d otherwise get yourself into.

Sometimes, there are conflicts in a relationship or marriage that simply cannot be resolved amicably, and not for lack of trying. This is often seen where one spouse is of one faith and the other another. Neither side is likely to change their system of beliefs so there’s not much point in arguing about it.

In cases such as this, it’s better to simply agree to disagree and co-exist with your spouse. Just because two people have beliefs or opinions that are different from one another doesn’t mean they can’t continue to co-exist peacefully.