Conflict Can Be Scary 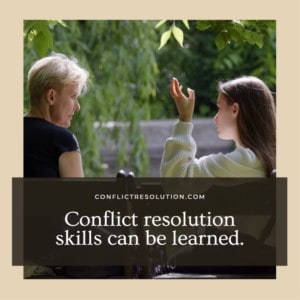 For the majority of the population, getting into conflict is either frightening or frustrating — or both. And, like many things that scare us, we try to avoid it in the future. Instead of confronting a conflict and exposing ourselves to fear or anger, many of us would rather just ignore the conflict rather than dealing with those feelings as that seems to be easier.

But is it really? Perhaps it is easier, though just because something is easy doesn’t make it right. Eventually, whatever the conflict was over is going to either build up move over time or it’s going to start affecting your relationship with the person you’re in conflict with.

Here’s the simple truth: if you want the problem or conflict to go away, you have to work to find a solution. That means facing your fears, your apprehensions, and the other person and working through the conflict.

The good news is that you can learn to get better at resolving conflict. Like anything else, it just takes practice (and perhaps a bit of patience) for anyone to become more adept at problem-solving.

There are many, many posts just in this blog that give you tools to work through conflict with a variety of parties: family conflicts, relationship and marriage conflicts, and workplace conflicts. In general, the basic steps to resolving conflict are:

Now, seeing it laid out like this might make you think that I’m saying conflict resolution is easy. It can be in some cases, but in many cases it can be difficult. Just remember that you can get better at conflict resolution with patience and practice.