When people disagree, arguments can get contentious very quickly, especially if the participants do not understand exactly what they’re arguing over (see our “Serbian Bog” blog post). Arguments can result in hurt feelings, anger, yelling, resentment, and hostility. However, you should know that they don’t have to.

So is conflict bad? Many people mistake the word “conflict” as a synonym for “fight” or some other antagonistic language. But there’s nothing inherently wrong with conflict. In fact, conflict is what helps individuals and society as a whole progress over time. Without conflict, we’d be right back where we started from with no collective improvement nor growth. The key to having productive conflict is to make sure the focus is on the facts of the matter at hand without personally attacking the people we’re arguing with.

The 3 Traffic Lights to Conflict Resolution

In order to avoid those hair-pulling screaming matches that some people insist on getting into during an argument, consider the following guide to negotiating through a conflict. It’s as easy to remember as any traffic signal on the roads today: green light, yellow light, and red light. 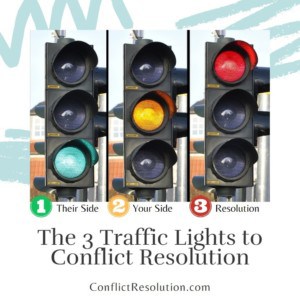 It’s important to follow these steps in order. Some people jump right into the “red light” or solution portion without understanding all sides of the argument. If the participants don’t understand where the others are coming from, there is a slim to none chance that the problem can be resolved.

Green Light: Their Side

The first step to conflict resolution is to allow the other party to explain their side of the argument and their viewpoints. You’re essentially giving them the “green light” to cover their side of the story and the facts as they see them. Once they’ve concluded, make sure you show them that you understand. Ask questions if you don’t understand and rephrase their point of view in your own words. “So, I understand that you’re saying…”

Yellow Light: Your Side

The second step is the yellow light, signifying that we’re slowing down on their side of the argument and starting to see your side as well. After you’ve restated what they’re point of view is, you can then continue with your own rebuttal and/or disagreements. “I understand your point of view. However, this is how I see it.” Try to avoid using the word “but” as this tends to cause all sorts of other conflicts that can otherwise be avoided.

Now that you’ve both presented your sides of the dispute, it’s time to stop at the “red light” and figure out a compromise or solution to the issue. Each side now understands the other’s perspective and a solution can be discussed and negotiated.