What Does “Conflict Quotient” Mean?

For example, a situation with a low conflict quotient is one where someone left wet clothes in the washing machine overnight. One partner is upset because now the clothes smell like mildew, they tell the other person, and the argument is essentially over before it begins with the offending partner saying they won’t let it happen again.

A situation with a high conflict quotient might be an argument between a mother-in-law and a daughter-in-law in regards to how to raise the couples’ children: either religious or atheist. This is an argument that many people would like to avoid having (it has a high conflict quotient) because it’s likely to drag on for years through adolescence as the children get older and it’s going to put the husband in a tough situation, stuck between his wife and his mother.

The Nature of Conflict

But before we get too far ahead of ourselves, let’s briefly look at the nature of conflict itself. There exist various definitions and philosophies addressing conflict, and some are more widely known and accepted than others.

Eastern cultures embrace conflict, knowing that it is only an interference of opposing energy patterns. Simply put, two or more person’s positions (energy patterns) are at odds or inconsistent with those of the other’s.

Eastern cultures urge us to welcome, if not befriend, conflict in order to align our intentions and energies with it, thereby offering little – if any – resistance. Once so aligned, we are able to move positively through the conflict, gradually embracing the outcome.

Viewing conflict within a neutral rather than a negative framework provides the participant with an active, integrated paradigm. That is, combine objectivity with a ready-made strategy for moving through conflict positively, acknowledge and excise the emotion, focus on the relevant issues and ultimately achieve accord.

How to Calculate Conflict Quotient

Most attorneys strive to remain objective and analytical when studying the issues and angles of a case. Most mediators strive to remain neutral throughout mediation, enabling and empowering the parties to effect a realistic, equitable settlement. And the modern litigator is much stronger and much more effective when armed with a working philosophy to take into battle (the conflict): they must determine, interpret and apply their own and their client’s conflict quotient. 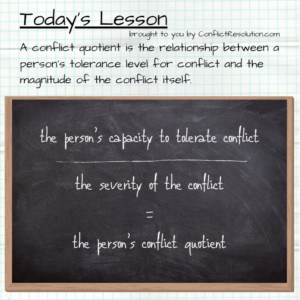 For example, suppose a client has indicated that his intention is have a lawsuit settle well in advance of trial. Perhaps he has even told his lawyer that he doesn’t want the expense, time, publicity or emotional drain associated with litigation. In this case, let’s assign the number 1 as the numerator of this person’s conflict quotient. On a scale of 1 to 10, this person demonstrates a low capacity for conflict in this particular situation.

The resulting number – 1/10 represents the client’s low capacity for conflict coupled with a grave conflict situation. It illustrates the client’s low “conflict quotient” – one tenth (0.10). With this information, we know that 1) the client is unwilling to engage in conflict and 2) there are serious potential complications related to the conflict. Therefore, finding an agreeable settlement is in the best interests of this client as opposed to having to go to court.

It follows then that if a client has substantial monetary resources and/or maintains a position that is willing to engage in conflict situations, we might assign the number 8 as the numerator. And if the nature of the case is not all that grave, we might assign a low number as the denominator – perhaps the number 3. In contrast to the first example, then, this person’s conflict quotient is much higher, or 8/3 (2.66).

You’ve probably heard the lamentation from lawyers and mediators alike: “This is a case that should have settled long ago.” Perhaps one of the reasons that most conflict has a life of its own – whether short-lived or lengthy – is that each party has his own capacity for conflict that is affected by the nature of the conflict itself. Truly, a lawyer’s high conflict quotient can easily fuel the litigation process if they’re unmindful of it.

How to Accommodate a Client’s Conflict Quotient

Try to construct the client’s and your own conflict quotient. Compare and contrast these results with those of your opponent(s). Take note of the discrepancy, if any, among the applicable conflict quotients. In sum, try to ensure that whatever “life” the conflict has is one that is not exacerbated by you or your failure to analyze all of the elements of the case – including the conflict quotient theory.

1. Act as a reality check for the client. Determine if they understand what can actually occur in litigation: time involved, expenses, emotional commitment, and tediousness. All of this can deflate even the staunchest of high conflict quotients.

2. Ensure that the client comprehends how the legal process might affect them. Litigation has given birth to divorces, love affairs, family discord, and financial problems. Don’t underestimate the human element here.

3. Fully explain the discovery process. Discuss the inevitable feelings of invasion of privacy and their accompanying stressors.

4. Determine the depth of the client’s commitment to the process and its unguaranteed result. This step is important to alleviate disappointment at the end – both theirs and yours.

5. Observe the client’s attitude and demeanor. If they are quick to anger, are always “running behind,” and want to leave the details to you, they are sending clear messages about their low tolerance level for conflict.

6. Determine their litigation style. There’s a deep chasm between the micro-manager and the phantom clients. Make sure you’re comfortable with the client’s style. If not – act accordingly, and quickly.